Sometimes it is easy to forget just how normal vaccinating is when we hear so many stories about vaccine refusal. But in almost all communities, the majority of parents vaccinate their children, and it is most often a crushing, 99% supermajority who bring their kids in to get shots and to stick it to preventable disease. But what does this really look like? Let me give you a metaphor.

Let’s say we are watching a Minnesota Twins ballgame at Target Field. (I’m only there for the hotdogs, truth be told.) In the middle of the third inning, for no reason in particular, a plane flies over head and drops thousands upon thousands of slips of paper on the stadium. These papers litter everything – seats, staircases, the field. It absolutely overwhelms the capabilities of the stadium workers, and people who were watching the game realize that they are going to have to help to pick up the paper, too.

Pretty much everyone begins to pick up so that the game can resume quickly. With 40,000 people sitting in the stadium, everyone just needs to do a little bit to get everything back in order. And 99% of people are happy  to clean up.

But 1% of those sitting there do not buy it. Some of them are afraid of cleaning up, some are convinced that the paper is supposed to be there, and some just don’t want to. The question for today is not what motivates these refusers to opt out. The question is, what do the numbers look like, and what real impact can they have?

With 40,000 people sitting in the stands, 400 people represent our refusers. Target Field has approximately 200 sections, so if we spread them out, we would have two refusers in each section. Two refusers out of 200 people is not a big deal. (Besides, some of them might be refusing for legitimate reasons, like disability.) We can work around them. We can pick up their slack, sometimes without even noticing that they are refusing to contribute.

But what if the 200 people were clustered together? What if they were all sitting in two sections – the jerks in section 108 and 330 who sit and wait for the game to begin again. Some would argue that we shouldn’t care about them because they can sit in their own litter if that’s what they so choose to do. That is all well and good, except that paper flies. It doesn’t care that it was dropped in with the jerks in section 108. It will drift to section 107, and the people sitting there will have to deal with cleaning up, again, even though they had already done their share. 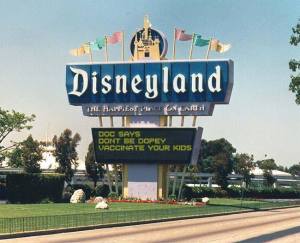 The implications of vaccine refusal are similar. We can deal with a couple of children who cannot be immunized or even one whose parents don’t want to immunize her because most of us are already doing the work. We know we are handling it, for the most part, because our children are not getting measles. In fact, thousands of children were exposed to measles at Disneyland at the beginning of this year, and did not get it.

We get into trouble when this refusal clusters into communities. Those clusters allow the spread of disease, and it is made worse when people in those communities are quiet and make it seem like refusing is the norm.

The big difference between picking up paper at Target Field and vaccinating your children is that de-littering your baseball section is something other people can see you doing. People sitting out are obvious because they are just sitting there.

What if we made it obvious? What if we found ways to work immunization into conversations in ways that assumed that we are all doing our part, since since most of us are doing our part? We aren’t the jerks in section 108, and our neighbors usually aren’t, either.